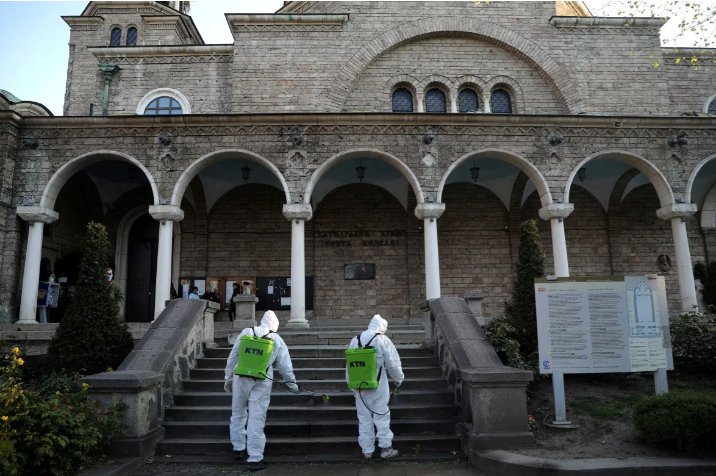 Did you fall into the “Covid-19 Disinfecting Cleaning” Trap? Choose the best

Did you fall into the “Covid-19 Disinfecting Cleaning” Trap?

Read this before you pay extra money for disinfection cleaning.

As a cleaning company, All Shine Cleaning Services cleans and disinfects your office every time don’t charge anything extra, if you are our client your Covid-19 disinfecting service is free or must we say, it’s included in the standard service.

I will drop this article here so you understand what I am talking about. ↴

Is spraying disinfectant in public spaces a good way to fight COVID-19?

Targeted disinfection of high-touch surfaces is more effective and cost-effective, expert says
Workers wearing protective suits, rubber boots and tanks of disinfectant strapped to their backs have been photographed all over the world hosing down plazas, roads, church steps, airports, vehicles, indoor spaces, and even the occasional person.

Some countries, such as Russia, Iran, and Indonesia, have even used trucks to spray more areas more quickly.

And an industrial complex in Chongqing, China, has built “mist tunnels” to spray employees with disinfectant as they arrive for work.

The disinfectant is typically diluted bleach. And officially, it prevents the potential spread of COVID-19, the disease caused by the novel coronavirus.

But are these methods effective? And is it something we should be doing here?

Disinfectants are effective against coronaviruses

Coronaviruses are enveloped viruses, which means they are protected by an “envelope” made of lipids or grease that is easily dissolved by cleaners and leaves the virus itself vulnerable.

“This means they are one of the easiest types of viruses to kill with the appropriate disinfectant when used according to the label directions,” says Health Canada.

It recommends cleaning high-touch surfaces such as door handles and phones with either:

It has also published a list of disinfectants that are likely to be effective against COVID-19 on hard surfaces.

But… the virus can only be put on surfaces by people

While some diseases are spread by animals such as mosquitoes, COVID-19 can only be spread from people to other people, notes Timothy Sly, a professor emeritus at Ryerson University’s School of Occupational and Public Health.

“It doesn’t exist in the environment,” he noted.

Respiratory viruses like coronaviruses are typically transmitted by droplets sprayed out when an infected person sneezes, coughs or, sometimes, just when they talk. In the case of coronavirus, it can even be spread by people without symptoms of the disease.

Those droplets can either land directly on surfaces or be transmitted to surfaces such as doorknobs if touched by an infected person, some of whom show no symptoms.

That means they’re found most often on surfaces that are touched a lot — things like handrails and doorknobs — as opposed to things like sidewalks and park benches, Sly notes.

It doesn’t last long on those surfaces — a few days at most — even when it isn’t exposed to outdoor conditions such as variable temperatures and humidity, sunlight, and wind. Those can all reduce the amount of time a virus remains viable.

Meanwhile, bleach also decomposes quickly in the environment, especially when exposed to sunlight and heat.

If that’s the case, why are so many countries spraying public outdoor spaces?

“In this case, it’s as much to do with wanting to appear to be doing something as it is actually achieving any objective,” Sly said. “It’s really gallons and gallons of disinfectant going down the drain.… The cost-effectiveness is really not there.”

He notes that in many countries that do this, people like to see large-scale action by the government. And they may already have dealt with other diseases in a similar fashion.

“Some of it is culture, tradition, what we like to see happening,” he added. “A little bit is science.”

That said, scientific research hasn’t really been done on the effectiveness of disinfecting public spaces, said Marc Lipsitch, an infectious disease epidemiologist at the Harvard T.H. Chan School of Public Health, on a call with journalists on April 7, the New York Times reported. However, he said it would be difficult to study because countries were using many different approaches to tackle the spread of COVID-19.

Are there any health or environmental concerns with this kind of spraying?

Bleach can burn your skin or eyes, which is why the people spraying it usually wear protective gear, and spraying it on your body or gargling it is not recommended.

Disinfectants such as bleach are known to trigger asthma and have been linked to other chronic respiratory conditions among people who are exposed a lot at work.

Sly recommends staying away from areas where people are spraying disinfectants if you have asthma.

The U.S. Environmental Protection Agency says that, in freshwater, bleach breaks down quickly into non-toxic compounds when exposed to sunlight. It’s not considered harmful to birds, but can be highly toxic to freshwater fish and invertebrates if high concentrations are dumped directly into a pond. That said, most cleaning solutions are quite dilute, to begin with.

Despite China’s widespread spraying, even one of its own scientists has begun to question the potential impacts. Zhang Liubo, a researcher at the Chinese Center for Disease Control and Prevention, has warned that it could cause environmental pollution. At a news conference in March, he said such disinfection was overdone and pointed to new guidelines suggesting no large-scale disinfection outdoors, no outdoor disinfection during rain or snow and no air disinfection outdoors, state-owned media outlet Xinhua reported.

Are there cases where spraying disinfectants in public places makes sense?

Disinfecting high-touch surfaces such as poles on transit vehicles, handrails and door handles make sense and is already being done in most Canadian cities.

Physical distancing rules to curb the spread of COVID-19 mean playgrounds are closed across the country and bylaw officers are ticketing people to discourage them from sitting on park benches in some cities right now.

But once those rules are lifted, Sly thinks it may not be a bad idea to spray things like play equipment and park benches daily too.

On the other hand, he suggests using a spray bottle and a wipe rather than a hose might be more targeted and cost-effective.

Best Ways to Help and Give Back during Covid-19